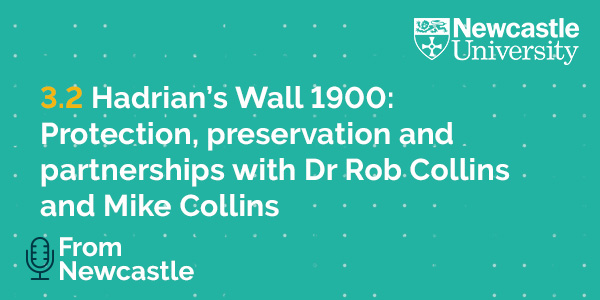 Hadrian’s Wall was the north-west frontier of the Roman empire for nearly 300 years and crossed northern Britain from Wallsend on the River Tyne in the east to Bowness-on-Solway in the west.

In this episode, we will learn how partnerships are playing a key role in the future of Hadrian’s Wall, the importance of community engagement and how you can get involved in the ‘Hadrian’s Wall 1900’ festival, celebrating the 1900th anniversary of the beginning of the construction of the wall.

Dr Rob Collins is a Senior Lecturer in Archaeology (Material Culture of the Northern Frontier) in the School of History, Classics & Archaeology, seconded as Project Manager to the Hadrian’s Wall Community Archaeology Project (WallCAP). Formerly a Research Associate leading on the Frontiers of the Roman Empire Digital Humanities Initiative (FREDHI), he has also worked as the Great North Museum Academic Liaison Officer, and as the Finds Liaison Officer, North East, for the Portable Antiquities Scheme, based in the late Museum of Antiquities and its successor, the Great North Museum. You can follow Dr Rob Collins on twitter @duxBritanniarum.

Mike Collins is an archaeologist and heritage manager at Historic England, the Government’s lead advisor on heritage issues.  For much of the last 20 years, Mike’s work has focussed on the Hadrian’s Wall World Heritage Site in the North East and North West of England.  Much of this work was concerned with the protection of the Wall and its special qualities, but also in negotiating development proposals, management planning and repair schemes for sections of the Wall in both public and private ownership.  More recently Mike has combined work on Hadrian’s Wall with managing a team of specialists providing advice on development and strategic planning in relation to heritage.